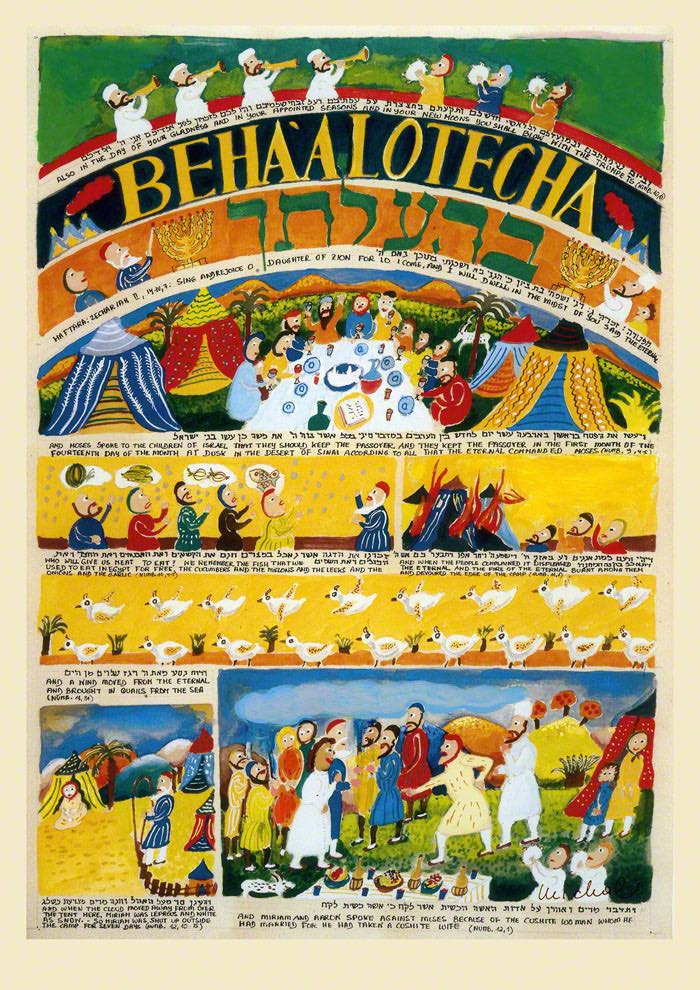 Wow! So much in this week’s Torah Portion! It actually makes my head spin and is an “oh man” gut getter…or am I the only one that struggles with my mouth?

Both, what goes in the mouth (food) and what comes out (evil speaking)…

Every year, upon reading this particular Torah reading, I ponder the fact that these Israelites were ready to turn back to Egypt, back to bondage, just so they could indulge their appetites. They were craving meat, leeks, cucumbers, garlic, and whatever else they were used to eating…They were willing to go back to a life of slavery.

It smells of trauma bonding and food addiction to me…and also, being a survivor of domestic abuse, which is trauma on steroids, I get it… it’s the familiar, the norm.

Kinda like Esau selling his birthright for a pot of lentils.

Good food. Who doesn’t love it? Ah, maybe that is the problem! Can food be an idol? Just asking…

I hate to admit it, but I struggle with an eating disorder. You see, as a little girl, I found comfort and love in my mother’s homemade scrumptious foods. Especially her chocolate cream pie. I can be there in a heartbeat in my mind’s eye, at the dining room table, alone, feeling safe for a change. Delighted that my mother had an abundance of fresh cow milk from our neighbor, Mr. Choban’s cows. Mother would make homemade old fashion chocolate cream pie filling. And laden the top of the pie with whipped cream.

Food. Needed for survival. Food. Nourishing and Nurturing. Food. A weapon of mass destruction. GMO’s, pesticides, created famines…but, that is not the point of this blog but yet, it is food for thought with what is being created in these final hours of earth’s history as we know it.

The Hebrew term lashon hara (or loshon hora) (Hebrew לשון הרע; “evil tongue”) is the halakhic term for a derogatory speech about another person. Lashon hara differs from defamation in that its focus is on the use of true speech for a wrongful purpose, rather than falsehood and harm arising.  Speech is considered to be lashon hara if it says something negative about a person or party, is not previously known to the public, is not seriously intended to correct or improve a negative situation, and is true. Statements that fit this description are considered to be lashon hara, regardless of the method of communication that is used, whether it is through face-to-face conversation, a letter, telephone, or email, or even body language.

For those of you interested in another point of view on this week’s Torah Portion:

On the date commemorating the Exodus from Egypt, it is a mitzvah to celebrate the holiday of Passover. When the Temple stood—may it be speedily rebuilt in our day—this celebration would entail bringing a special sacrifice on the day before Passover, the Paschal lamb. The Torah tells also of a “Second Passover” granted to a group of men unable to fulfill their obligation with the rest of the nation on the regularly appointed holiday. Because they were ritually impure, they were excluded from performing the sacrificial offering in honor of Passover. Aggrieved because of their missed opportunity to fulfill a commandment of G‑d, they approached Moses and asked that he somehow make an exception for them. G‑d spoke to Moses and told him to establish a makeup date, one month later, after they would have a chance to purify themselves. The “Second Passover” thus became a mitzvah, a commandment of the Torah, eternalized for all time.

The Second Passover represents the power of teshuvah (literally: “return”). By returning to G‑d, one has the power to retroactively transform past failings into veritable merits. For it is the penitent’s prior distance from G‑d that serves as the very springboard for his current heightened desire to cleave to Him. Ironically, had he not once been estranged from his G‑d, he would never have come to the kind of yearning for Him that he feels now. The darkest moments of his past, what was once his greatest liabilities, now become his greatest assets, the source of intense motivation for re-found closeness with G‑d.

Such a condition, however—where past misdeeds become virtues—cannot be premeditated. G‑d’s rulebook could never prescribe failure to serve G‑d properly as a way to later become closer to Him. The opportunity to transform the past must come from the penitent himself. He must ask for it, and only then is it granted.

In recovery, we’ve found a new relationship with G‑d. We have an appreciation for His wisdom, love, and guidance that we are quite sure could never have been possible had we not been forced to turn our lives over to Him as the only known treatment for a disease that is progressive, incurable, and fatal. We did not become alcoholics in order that we could later discover G‑d in recovery. Nor is that something that we could ever have planned. It isn’t even something G‑d would have told us to do.

We could never have planned it. G‑d would never have advised it. But this is how things worked out.Some might think it odd when they hear an alcoholic in recovery say something like “Being an alcoholic is the greatest thing that ever happened to me.” Perhaps they think that recovery is meant only to make us more like normal people, to catch us up. But we do not have the dubious luxury enjoyed by “normal people” who decide how and when to let G‑d into their lives. Such is our fortune: that we must strive to join that happy lot for whom their very survival dictates that they give themselves entirely over to G‑d.

We could never have planned it. G‑d would never have advised it. But this is how things worked out. And this is what has made us closer to Him today.

By Rabbi Ben A.

Now these things took place as examples for us, that we might not desire evil as they did. 7 Do not be idolaters as some of them were; as it is written, “The people sat down to eat and drink and rose up to play.” 8 We must not indulge in sexual immorality as some of them did, and twenty-three thousand fell in a single day. 9 We must not put Christ[a] to the test, as some of them did and were destroyed by serpents, 10 nor grumble, as some of them did and were destroyed by the Destroyer. 11 Now these things happened to them as an example, but they were written down for our instruction, on whom the end of the ages has come. 12 Therefore let anyone who thinks that he stands take heed lest he fall. 13 No temptation has overtaken you that is not common to man. God is faithful, and he will not let you be tempted beyond your ability, but with the temptation, he will also provide the way of escape, that you may be able to endure it.